Here we are back at the Finca in the Sierra Aracena. At first I thought there were no more flowers but on a short walk up to our era ( where the grain used to be threshed) we came across all these tiny flowers. In the bible of Mediterranean flowers it states they like rocky places and the stones are still in place on the era and it is on a rocky hillside. In the Latin names both the snowflake and squill are down as autumnal and with no leaves. These come after the flowering. And then there was this one extraordinary lily and again with no leaves and just a long stem. I’m hoping the Ohio blogger might cast some light on this variety. It is out now in the public gardens in the town of Aracena. An autumnal lily?

Having just passed the equinox at least all around the world we share the same amount of daytime for a while! And I really enjoy sharing blogs with everyone all around this most amazing world of nature and the humans that love and care for it!

Feature Picture by Lesley Martin
24/05/12
‘The population of gannets on the Bass Rock, off the East Lothian coast in Scotland, has reached an all time record. There are now around 150,000 birds which will increase further once this year’s chicks have hatched. The Bass Rock is the largest single gannet colony in the world and was described famously by Sir David Attenborough as ‘one of the wildlife wonders of the world’.’

We hope that on this referendum day for Scotland  whoever wins  the power  will protect the amazing range of wildlife that also has its home in and around Scotland.

On my recent visit back to the UK we  went to visit the RSPB reserve at Bempton Cliffs. Here we were able to watch at close view gannets flying, soaring by from cliff top viewing points. For me far better than taking a boat out to sea and far off rocks. Still haven’t quite recovered from my 24 hour ferry from Santander!

We learnt some interesting facts about gannets and can now possibly age them as under five years old or over.  The young are quite black and then become more speckled until when mature at 5 and ready to mate their plumage becomes brilliant white with contrasting black wing tips. Around their brain is a kind of jelly that protects against the cold of the sea and their rapid dives in to catch fish.

Another place that we saw gannets a couple of years ago was off the coast of Ireland. We were visiting our friend in Kerry and went on a boat trip to the mystical and wild Skelligs. On Skelligs Michael in May there were also plenty of puffins and other sea birds  such as Razorbills.  Two places well worth a visit for the wildness and the wild inhabitants. Photos below with thanks to Nature Watch and other wiki sources. Last one …. My iPhone….. 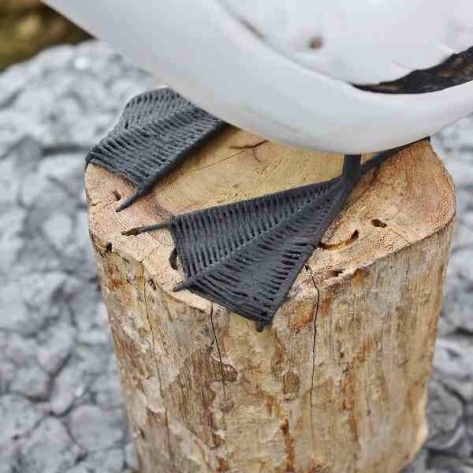 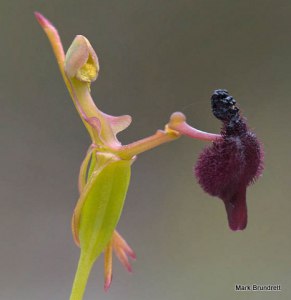 Orchids go to great lengths to attract the insects that are vital to their survival.

Like humans, they put on a pretty dress, slap on some lipstick and perfume, flirt and promise sexual favours and gifts (but do not always deliver). Some even resort to trickery and traps via a sort of passive aggressive courtship that leaves their suitors frustrated but unharmed.

Imagine you are one of the 25,000 or so wild orchid species trying to make sure that pollination takes place while your flowers are in bloom. You need the insect to find and choose you over the multitude of competitors in the area.*

Can we blame them for indulging in a bit of sexual deception and manipulation?

Don’t be fooled by appearances

Some members of the orchid family mimic plants, such as lilies (e.g. Phaius tankarvilleae), that typically trade pollen or nectar but may…

Some follow up photos and thoughts on  waking up the seeds at Wakehurst Place, the  Royal Botanical Millenium Seed Bank. Many of the seeds conserved so far have been UK indigenous and endangered. Some of these seeds collected are being used to restore wild flower meadows in UK.  I am pondering how to maybe use some of the wild flower seeds on the Finca. Should I offer a helping hand?  Or interfere with natures’ ways? Is too much endangered and we need carefully planned conservation of  habitats that support biodiversity.

The view walking down to the Millenium seed bank looks as if you are walking towards greenhouses! However the Southern roofs all have solar panels to give the power needed to conserve the seeds that are in deep freeze way down below in the vaults of the building.

This seems all very high tech as you can watch the botanical scientists at work in the airy and light atrium.   There are also some photos and beds of seeds from the seed bank. Some of the endangered seeds from hot dry habitats are shown. These have been grown from seeds once frozen.BUT not all seeds can be preserved by deep freezing. This seems to support the case for trying to conserve habitats but in some areas this is difficult due to many human factors and I will include drought in that as it is likely that is due to man made climate change. 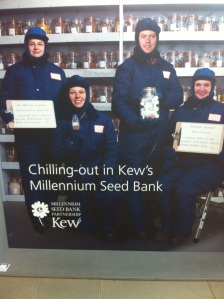 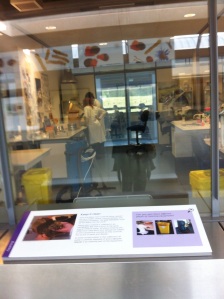 Another thought that occurred to me having read a fascinating blog on orchids and their seductive nature for key pollinators is the need to conserve the pollinators too! Thanks to Pipmarks for that and the comment on previous post should link anyone interested in orchids. I will end with one of the photos that had won the photography competition on display at Wakehurst. Such detail and so complex a beastie!

Fifty years ago Wednesday the Wilderness Act was signed into law by President Lyndon Johnson. The act gave a legal definition to the term “wilderness:”

A wilderness, in contrast with those areas where man and his own works dominate the landscape, is hereby recognized as an area where the earth and its community of life are untrammeled by man, where man himself is a visitor who does not remain.

Nine million acres of public land were initially designated as wilderness. The act is one of the most significant pieces of environmental legislation in American history, because it concerns land and water already designated as national park, forest, or wildlife refuge, and forever protects these wild areas from damage due to logging, grazing, mineral extraction, road-building, construction – or any human manipulation, good or bad. The act essentially says “Enjoy these places and life forms, but don’t alter them.”  Keep Them…