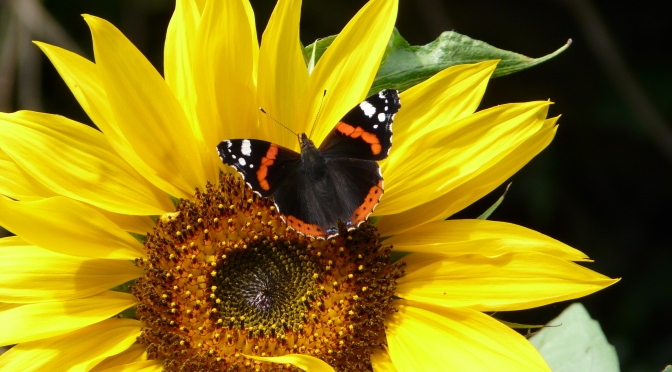 From a very lush and wet warm summer in London, through the beautiful greens of France, stained glass of Chartres, Cloudy heights of the Pyrennes, Cool air of Bejar, to the hot and dry Sierra Aracena. However, the Sierra is always green in summer because of its varied trees; chestnuts, oaks and various poplars and willow.

The red admiral landed happily on the sunflower planted by my daughter in London. She loves the garden, birds but is not so sure about the flying insect world! The wild bit at the back with nettles helps the red admiral thrive.

Arriving at our finca there were few wild flowers. It’s the wild carrot time and a few yellow mullein. Most was quite dry. Apart from my garden areas where Ruth had admirably kept the plants well watered from the drought and heat of July and August.

A pretty wall brown landed for a while on the echinacea near the house. Bees and other pollinators seem to like this cultivated flower. 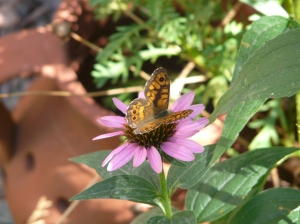 Another long journey. This cricket was on the windscreenwipers. We thought it would jump or be blown off. It stayed on its green home, our car, while we collected our freshly baked bread from our local village. It is an alternative bakery with organically grown wheat or rye flour. A large traditional clay oven is used. The cricket waited.

And the cricket returned for its photo opportunity and chance to be a celebrity in my animal stories of Navasola! We think its pholidoptera griseoptera, a dark bush cricket.  There are so many, and then there’s the true crickets. And the cave cricket. And a camel cricket! It was light brown and the Dominion guide suggests there are several similar species in Southern Europe.

There is certainly a cricket with a high pitched chirp and it keeps me awake at night too. At least its not aircraft noise and it is rather soothing.

In April and May it was so wet. The rainfall in May filled our pond to overflowing. We went down to investigate the water level in the pond now. There was nothing. Last year it had retained water at a lower level through the long dry summer. Why had it dried out? The evidence was before us. That wild boar family that loved rolling in the mud in May. I guess now they’ve scored an own goal. No more water in the pond. Tusk marks in the strong, expensive, plastic base. Without this, the water did just drain away. We will have to rethink on this one. Seems a shame to put a boarproof fence around a water hole.

We’ve also just been reading about reports of wild boar, jabeli, visiting the beaches in Spain. At dusk I think and still not quite sure which beaches.The report in Spanish was about the increase in the wild boar population. Not enough hunters? I say, not enough wolves! We’ve got 7 more baby boar on our small finca. Perhaps some will move to the coast?

Apologies for not much blogging recently. I think I have been suffering from my own drought. I have been trying to re edit the first chapter of my novel.It’s been quite a journey writing it, literally as it has taken in a quest through Spain, France, Germany, Denmark, Sweden, Norway, Holland and the UK. A nature quest! I have also spent a lot of time struggling with rewriting the beginning and becoming anxious about the next stage. There have also been the chores and the DIY and clearing of beloved brambles and the heat! Most needs to be done in the early morning!

Thank you to all who read this far and have been following my journey. I look forward to some more catching up with you all. The weather is a little bit cooler. I have re edited my first chapter!

31 thoughts on “Summer journeys almost over: butterflies, bees and boars.”