The human world seems to be distracting me from blogging. But I have been out and about at Navasola and also able to try photographs with a friend’s lumix camera. It was quite disturbing at first as all I wanted was an ordinary still photo and it was set on 4K! It’s been quite a learning curve and I have also been busy in my veg plot trying to create some beds which will retain moisture. I am trying out Hugel Kultur as I have lots of wood and have laid down branches at the base. More on that another time.

April and May have seen Navasola full of wild flowers so here is a glimpse of that glory as the heat from Saharan Africa has already reached us and the Spring flowers have given way to the more drought and heat resistant scabious and mulleins.

First the peonies. There were the most I’ve seen on the Finca this year. It was hard to photograph the overall effect  so there are some close ups with the new lumix camera.

Some of my favourites here in Spring are the tassel hyacinths, palmate anemone, celandine and the knapweed.

But there’s always the Spanish broom and Spanish lavender or French unless you are in Spain! Photo angle courtesy of Steve Schwartzman’s very informative blog for photography tips and botany. 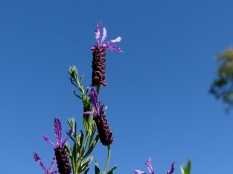 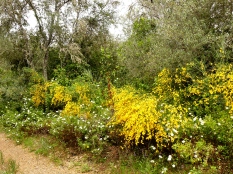 I also had difficulty cultivating one of the vegetable beds. It was full of poppies and a first for me. I couldn’t then remove these beauties! Dig up the ground and they will come!

We have had had plenty of birds around too but it is our water bath that is the draw not any food we put out! One day red rumped swallows checked out our new porch but didn’t return. Another day the sky was full of vultures. There must have been over 30 gathering and some flew so low over us you could hear the wing beats.

Greetings to all those bloggers out there who follow me. I have been keeping an eye on your posts but needed to get back in gear. A new blogger and follower from a place I lived in 30 odd years ago sparked me to return to share. Landscaping Nature from Hyderabad in South India. I have got further with my novel about the wild world  and hope the blog can also help inspire us with nature and it’s diverse wonders.