Time to officially say goodbye to summer. All the migratory birds are getting ready for their long journeys. Although this year there were many swifts around the village of Castaño de Robledo we had not seen any bee eaters perched high on branches around the valley of Navasola. Occasionally we would hear some high pitched calls high in the sky but there were no bee eaters ready to pose as in previous summers. Finally, we saw a great host of golden wings, at least 30 or more, above the track by the campsite. I am not sure what a large gathering of
bee-eaters might be called but we had witnessed this before in Portugal. We think it happens as lots of birds gather together, travel together, finding good food sources before their journey back to Africa for the winter. I think an angelic host could be fitting as their wings whirr and flash golden light in the Andalucian blue skies. We wish them safe journeys and look forward to their returns.

What happens to all the grasshopper, crickets, cicadas at the end of summer? We can still hear them in the trees in the evenings but the noise of their whirring legs against their wing cases seems less intense. Perhaps the summer work is almost over. More young will be ready to develop and hatch out at the end of this winter.

Does one red rump swallow  a summer make? We saw quite a few swallows in early spring in the Algarve but haven’t seen that many in the villages of the Sierra Aracena this year.

Here are some House Martin young from a previous year. They seem to be imprinting their surroundings and gathering for their long journey back. This year they arrived late in the Algarve and usually we see them here in late September and October. We are by the sea at the moment waiting for my grand daughter to arrive for her first and possibly last trip as a European citizen. Brexit looms and glooms. Perhaps it is the conjunction of Mars and Saturn so clearly seen last night in the summer sky over the Atlantic that makes me edgy about the future. How much time is being wasted on the politics of arrogance, exclusion and supposed greatness? Meanwhile the planet warns us with temperature rises we can do something about and constant degradation of the natural world and its wild places and inhabitants which we can  prevent, now. Those in power who cannot focus on this agenda fail the younger generation.

We have had a wonderful summer of beautiful nights out with stars and full blood moons. I wrote a piece based on my first night sleeping at the finca. It was often so dark and remote but we build up fears about the dark rather than celebrate its beauty and in Mediterranean culture its coolness. So much happens here late at night and early morning in the summer. We have had plenty of good music from the early music festival in my previous post to rock, jazz and flamenco. Also in the Sierra there’s has been a feast of art exhibitions, theatre, acrobatic drama and a book festival too. Unfortunately we missed our friends Ruth Koenigsberger and Sol Fernandez Coll. But we managed to hear our local writer Margaret Van Epp speak about her book about the historical stories local people have told her. I have also enjoyed some summer reading and love the short stories of Annika Perry, a  fellow writer and blogger. I am building up the rejections on my novel but I will press on as I think it is an  entertaining and imaginative  approach to understanding the value of biodiversity in the 21 st Century.

In the U.K. we enjoyed the annual Fairport Festival at Cropredy and even danced to Brian Wilson, Al Jardine and their band reliving Pet Sounds and the Beach Boys under a more stormy British sky. The rains decided to come as we camped in middle England. We slept in the van we would use to move house! Here is Olivia helping drive our hired VW transporter full of books and stuff for our new base in the U.K. She seems happy we will be nearby. 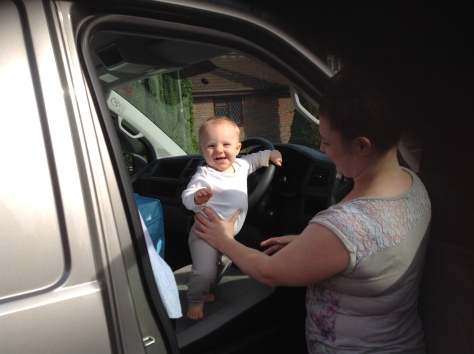 For now I have a terrible desire for a camping van( hybrid, electric, solar powered?) and will also head to the beach with the crowds for this last day of summer. I haven’t been swimming in the sea yet! I keep thinking life will slow down so I can write and blog more but this Grandma business seems to take over!