We are on the move again! This time we have stopped in Chartres to finally visit this most elegant and spiritual cathedral. With its stunning stained glass, lofty towers and the very special labyrinth, it is a a must to visit. And I feel to return to. The son et lumiere on the rose windowed portal at night was also delightful. Quite a show.we have chatted with visitors and tried a bit of French! There seem to be less visitors at present but our hotel is full. Whenever we visit France there is always something so beautiful to see. On our way to our London home we saw the Osprey in Orleans Forest. Now we see this special place for the first time instead of just passing by. Soyez courageux. We should show our friendship with France and make sure we visit when we can! 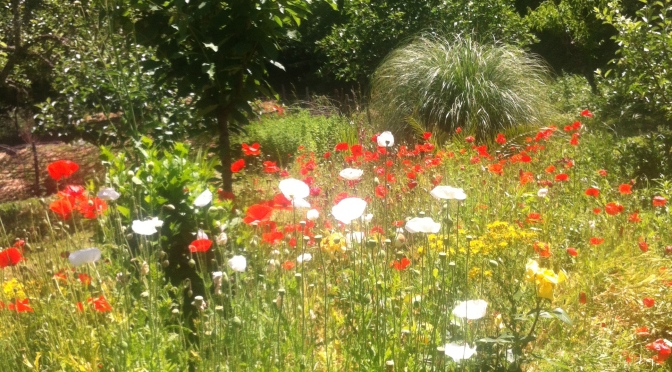 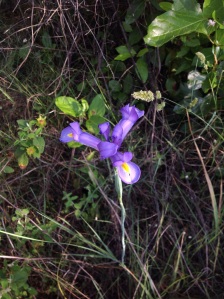 I miss the wild blooms
Of Summer’s soothing softness
So all seasons change.

With a long road trip ahead of us and the car laden with stuff to take, including all the wood carving tools given to me because of the sad closure of Heston Woodcarving Club, I was just a little bit anxious that our old car would make it. I was also sad to leave London, and all our family and friends but was also missing our little hidden valley in the South of Spain. Almost 2000km between us. I feel split between two worlds but am fortunate to have that choice.

Travelling through the green of France made me really think France could feed the world. So much agricultural land and such an industry with tractor factories all over the place too! Later I read that France was going to pass a law about waste food in supermarkets. Ironic and sad in a time of food banks for many.We had decided to go on roads without tolls and although a bit slower it was much more interesting and gave me more of an insight into being in France. Hopefully, it was also more fuel efficient and would save at least 100 euros in tolls.
I know Northern France quite well and am always amazed by its peacefulness as we used to take school trips to the World War 1 battlefield sites: Vimy Ridge and Beaumont Hamel, the Canadian sites are both historic and a reminder of a Europe torn and devastated by war, a hundred years ago. We passed to the south of some of these but did pass some graves still immaculately kept in small villages. These places are an important reminder of those who fought and of how now we need to continue to fight for a better world for humans and all species to live in. So many died so young and of a similar age to my 17 and 18 year old A Level students. So we travelled through minor roads near the Somme and even further back in time to Agincourt and finally came to the land of the rich. We stayed at Chateaudun, just south of Chartres. Here is supposed to be the first chateau to be found when coming from Paris to the Loire region, famous for all its chateaux along the river. Holiday homes for the rich. And then the revolution and the French love of Egalite, Fraternite,Liberte and all things French, like good food and wine. On the good food and keeping the French language French, there are some popular eating places such as Macdonalds and Buffalo grill which seem to be doing well as fast food chains, though along with Flunch, a cheap way to self service French dining. We enjoy finding Flunch and can easily even share a meal there!

The journey through the Basque Country of Spain was beautiful and there are now some amazing roads but the Spanish do charge on these new super highways with major long tunnels through the mountains. The amount of road trucking transport is phenomenal. It is times like this that I do wonder how all this will have to change and hope that by reading Naomi Klein’s book ‘This Changes Everything’ a bit more I can get some insight. It seems to me from the book that there is too much control and investment in the fossil fuels industries which has slowed down the technologies we could all be changing to now. Will these be the giants like the dinosaurs bringing us and other species closer and closer to extinction. Or will it be me, one little ant with a lot of emissions. Could I have been driving a solar powered car? Well, certainly the sun shone most of the way this time!
We then stopped in Salamanca, always worthy of a return visit and always something new to see.mthis time it was the historic Paza Mayor,made all the more interesting by a political demonstration by the new found voice of local people. Ganemos in some way connected to Podemos, the fast growing alternative to the big two party system that has run the show for so long in Spain.

Finally home in our hidden green valley. And was it green. I had worried more about lack of but had been told it was often raining in April! I had to rejoined ice in the exuberance of the wild things growing or despair as my vegetable area was covered in all types of grasses and vetches.some time will need to be spent finding the beans and fruit bushes. Time will also have to be spent in looking at all the wild flowers. There are so many will keep me busy for months but suspect they will not last into the heat of late June.

The journey without tolls was from Dunkirk to Chateuadun to Dax. (with some help from the AA non toll maps.)Dax to Irun and then we chose the highways to Salamanca,mfinally paying a toll near Burgos of 27 euros. We have done this section without tolls but the new autoroute is quite spectacular.