The past week has been a week of firsts. It was the first time I saw a weasel in the wild. He or she  was very close to my feet and I must have startled the poor creature into stopping still as it was madly chasing a lizard for lunch. Lucky for the lizard, my feet helped it get away, that time. For a few seconds the weasel was absolutely still and I could see its face and most of body clearly. Full identification is unclear as I did not see its tail, which I am told if it had been a stoat would have had a black tip to it. It was very small and about a year ago Josie, Theo and I had visited the British Wildlife Centre and been intrigued by the weasels running fast around wire tunnels. It seemed very similar to those.

The next first was ….. Sorry, I have never made jam  before. It is plum time in the Sierra Aracena. We have found some plums on the Finca and picked some but a few days later ……..all gone.We think some badgers or the wild boar as the birds only peck at them. Perhaps they have learnt to bash against the tree. Friends also have many plums and I was given a large box of juicy yellow plums so I have experimented with pickling some, drying some in the sun, and jam. The plum jam recipe that worked was easy and just seemed to be throwing the same amounts of plum and sugar into a pan and stirring and waiting and stirring and waiting… However the taste of this jam has met with approval and we have done an exchange for a jar of strawberry! My next batch will not be so easy to exchange as I went a bit mad on the ginger.

The final first was to eat my first ripe homegrown tomato. With all the building work and the need to prepare an allotment patch in this wild and overgrown place I feel pleased that my friend’s tomato plants are now beginning to show fruit. I am also hopeful about the seeds from Lidl supermarket’s butternut squash. After a lot of earth clearing and moving. I also moved some of the wild bugloss which did try to hurt me with its stinging hairs in exchange for being given another place. There is at the moment a lot of it on the Finca. Is this part of the wild bison work that might be needed in the wild?  Pictures of the small garden by house and the Huerta, vegetable garden I am preparing in one of the chestnut fields. And of course the tomato. 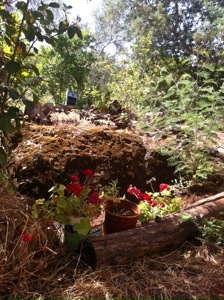