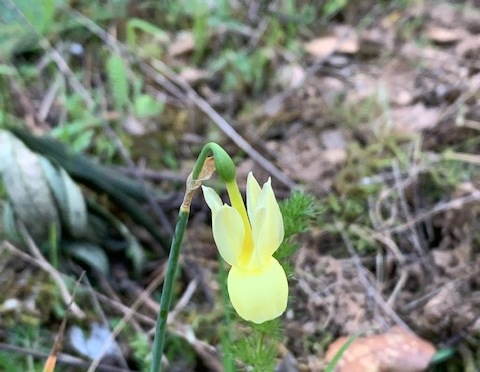 If I had just chosen to write my February post before the invasion of the Ukraine last week I would have written about my peaceful but busy existence on our Navasola woodland. And the coming of Spring with lots of bird activity, a range of butterflies and the rare wild daffodil, the Angel’s tear. I have also embarked on a reading challenge to read or for me re read War and Peace by Tolstoy. As I read it many years ago in my youth it was interesting to revisit and is also giving me some insight into the current crisis and the history of Europe.

One of the reasons I like the blogging world are the different experiences and connections that build up. One longstanding one is with Steve Schwartzman and Portrait of Wildflowers. Botany was the first link and then his incredible knowledge of Spanish and the research he did trying to find the origin of the name of our local village, Fuenteheridos. On the surface it looks like wounds- heridos and fuente, a source of water, spring. Inddeed the village is a source of much water through twelve springs. Steve found the old word ‘feridos’ which is to do with irrigation and taking turns and sharing the water. I am going to share Steve’s recent post as he suggested to show solidarity with the Ukraine. I found this very moving and beautifully written by his father, Jack Schwartzman about leaving his homeland. Lilacs for me were part of my childhood home and they will now also remind me of those who have had to leave their homes because of war and tyrants.

This is the link to the War and Peace 2022 reading Challenge of Rebecca Budd.

The characters and the Russian high culture at the time is as intriguing and involving as I found it when younger. Tolstoy is certainly so skilled at writing and can immerse the reader within these different worlds. However, I have been intrigued by the narration about the battles of the Austrian and Russian Army against Napoleon in 1805. There is an ease of moving between characters and events. I have selected a quote below as Tolstoy shows such insight into truth and integrity. And as we know ‘the first casualty of war is truth.’

“Rostov was an honest young man who would never tell a deliberate lie. He set out with every intention of describing exactly what had occurred, but imperceptibly, unconsciously and inevitably he drifted into falsehood. If he had told the truth to these two, who had heard as many descriptions of cavalry charges as he had, had their own clear idea of what a charge was like and were expecting something similar, either they wouldn’t have believed him, or worse still, they would have assumed it was Rostov’s fault for not managing to do what was normally done by narrators of cavalry charges. He couldn’t just tell them that they’d been trotting forward together when he fell off his horse, sprained his arm and then ran as hard as he could into a wood to get away from a Frenchman. Besides, to tell everything exactly as it happened would have demanded enough self-control to say only what happened and nothing else. To tell the truth is a very difficult thing, and young people are hardly ever capable of it. His listeners were expecting to hear him describe how he had felt himself burning with excitement, stormed the enemy’s square defences, oblivious to everything, hacked his way in, mown men down right, left and centre, tasted blood with his sabre before collapsing from exhaustion, and all the rest. And that’s what he did describe.”

And as we know ‘the first casualty of war is truth.’ It seems also in our 21st Century that peace has also created a culture of lies, mis and dis information and there is a need for truth and integrity. I think Tolstoy gets quite a lot right about his character Rostov but later we do find out that Prince Andrei Bolkonsky appears to see through this fiction that Rostov is compelled to make up.

But I do not think young people today are incapable of telling the truth. Many of the young climate activists are trying to get the adults to understand and take on board the truth about climate change. Today marks another warning about how the climate crisis is going to bring more of the chaos we are already experiencing if we do not act together.