I am in Rhodes with a longstanding friend who loves the island and visits regularly. More will follow on this beautiful place but I am prompted by Dverse poets to write a haibun about walking.  A haibun is poetic prose followed by a haiku. My friend and I have been fortunate to do a lot of walking together.

In youth, we walked and walked, together. Teenage talks and teenage walks to Barnes pond, along the towpath of the river Thames, across Hammersmith Bridge. We walked our children too into Manchester’s many parks and out to the moors of Derbyshire. We’ve walked in friendship for more than 40 years. And now I finally walk with her in her beloved Rhodes. And we walk and walk.

Walking the past. In the present. Future thoughts.

Feet walk over cobbled stones in narrow streets. Above, the eyes take in medieval arches. Thoughts of knights and maybe horses along the wider streets leading to the Grand Palace of the Masters. Castle turrets protected the Order of St John. Stones in piles from pillars fallen. Many battles fought, won, lost. Bright bougainvillea flowers adorn walled gardens within ancient fortress walls. Scents of jasmine waft with sounds of many voices from many places. Scooters dodge the wandering tourists. Greek homes still within the sturdy old town walls from where the deep blue of the sea separates the isle from the mainland mountains of the Turkish coast. So near. So far. Empires have come, empires have gone. This small island a jewel to hold.

We walk along the ancient stadium of ancient Greeks. As women we wonder on the nakedness of men running fast, in the past! No women allowed then. Except for one. The mother of a hero. The broken Acropolis with scaffolding speaks of the need to respect the past but greatness goes. We walk around the ruins of men and there lies the small dragon lizard, still and basking in the warmth of ancient stones. We walk through the streets of modern Greece, the new town, coloured by blooms. Concrete sore we reach a deep valley park. Rodini. A jewel from the Italian rule. Now forgotten, neglected but it’s streams flow with life. Small turtles, egrets, giant carp and butterflies. We cross broken bridges, pass by young lovers. Here the world of green enjoys the lack of human tramping unlike the famous butterfly valley walked through by the multitudes who yearn for green and to see  some wild thing ; the beleaguered tiger moth.

We walk over more pebbled mosaic floors into holy places. Two headed eagles symbols for the Eastern Church. The frankincense and gold of icon painting fill the spaces with a silent sacredness. Behind a city wall a gate opens up into the Jewish synagogue. We walk through this with silent acknowledgement of a persecuted past. Spanish sounds sing songs of their Sephardic roots from Andalucia; my home now.  We walk to connect. So few returned to their island home. Down by the harbour in an old Islamic building we walk past the hopes of new refugees from not so far but far enough across the gleaming blue and treacherous depths. Later, we walk high up a hill, along a path with stations of the cross. From the giant cross, we walk no more but watch Apollo’s sun being guided down to rest beyond the horizon of the west. How long have we got left? 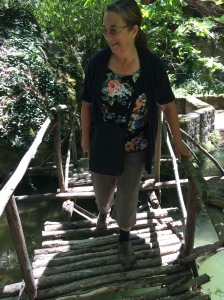 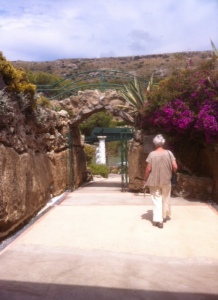 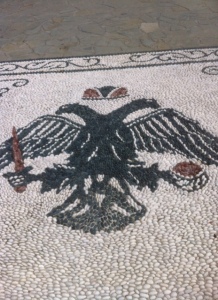 A week of changes. Changing places and changing weather.

Just before leaving Navasola I wandered into my huerta or vegetable garden. I wanted to check on the plants. I am hoping that I have created enough paths and cut back grasses and vetch to keep it all more under control. Last year when I returned in May I posted about my ‘Wild Welcome Back’. I was overwhelmed with neck high grass,vetch and then hay fever.

Maybe this time I  had a wild  farewell.

There were rustling sounds from within the abandoned olive grove. I stood very still and listened. I thought it might have been some noisy blackbirds. It often is! To my surprise a large female boar made her way into the field. Although there was a ‘boar proof fence’ between us to protect the huerta, I didn’t want to see it tested. I stood very still. Females are said to have a reputation. Following  her were three slightly smaller wild boar. Then one by one, a group of stripy baby boar trotted in. No camera,  no  phone, just me and the boar family.

I stood still and watched them move around grazing and looking like large dogs. The youngsters climbed up over some rocks. I just kept still, not daring to move and too far from the gate.Then the large female saw me. She came forward a little and but decided to turn away and run off, with the young ones following. It was quite a sight. Reading up a bit more I discovered that these groups are matriarchal and called sounders.They consist of the very young and slightly older females.It is far more common that boar will run away but it seems they may move towards you a little as their eyesight is so poor and they are curious. Most injuries to humans from boar are during a hunt and with the males turning to defend themselves if cornered.

After this event we were off to Portugal for my flight. I had a quick check on the house martins I am trying to survey. There are not so many on the frontline this year but these small birds were working hard with the mud to build over netting put up to prevent them. I had been disappointed to see this attempt to deter them in a local street.They certainly wouldn’t have bothered anyone in that location and it now looks quite unsightly. It also might mean the nests are less secure for the young. The birds are undeterred and determined to build in places they must remember. Those whose nests had not been destroyed have had a head start. I think they have got young and these might manage two broods.

In Dorset we had snow and hail, lots of birds and a vole. The bullfinch is a regular visitor at my friend’s  bird feeders, along with a nuthatch and some pheasants. After the snow a kestrel came by but the birds had disappeared into the nearby hedgerow.

Back in London I was shown the video of the baby robins nesting in the ivy by the house and at least two are now alive and well, feeding in the garden.  My daughter has fallen in love with feeding the birds and they seem to reward her. I was also updated with the slow motion function on the latest  phones. Mine is too out of date but it was lovely to see they had captured the garden Robin flying! Sorry no video as I have to update WordPress and pay money to upload a video! Will think on’t!

Now I am in the north of the U.K. and enjoying my other daughter’s young pet bunnies. These bunnies seem to want to blog with me! 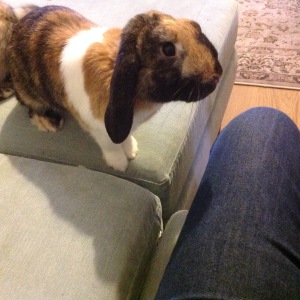 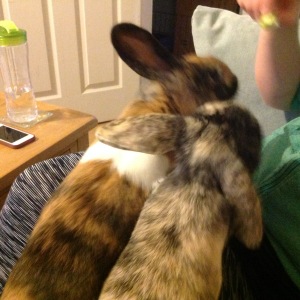 To be close to the animal world seems important. My wilder world of Navasola is still without pets and the wild ones choose their moments. Mice in the middle of the night and a mongoose went up through my rock garden one evening. The wild ones like to be invisible and secretive  but it is good to know they are out there.Not in the house! Four mice have been ‘humanely’ removed to at least 1 km away!

I am off to stay with a friend in Rhodes so hope to keep up with blogging about the flora and fauna there soon. I may not be on wifi much but hope to catch up with everyone’s blogs again soon too.