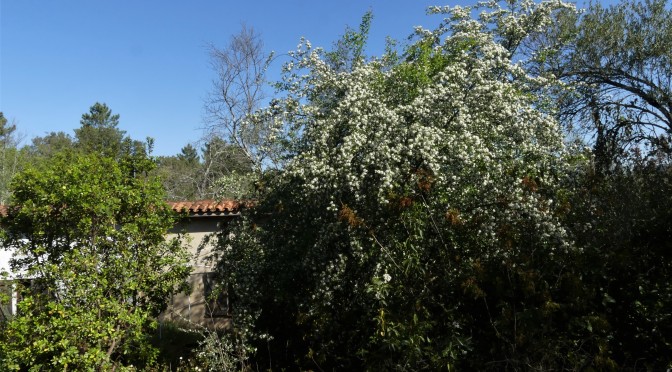 The May in May. The beautiful hawthorn near the back of our house and its may blossom in the sunshine. 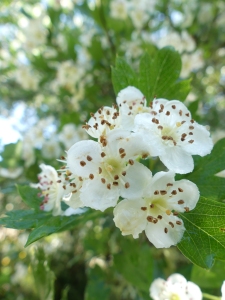 Wild peonies after the rain.

The mayhem here in the south of Spain is not just of the political kind as Spanish democracy votes in a new Prime Minister. Here the weather has remained cool, cloudy but with some beautiful sunshine and thunderous storms. May has gone, the month and as yet not the long suffering UK Prime Minister! Our month of May has been full of wild, wet and windy weather but with some glorious moments. Weather forecasters here in Spain seem to blame this on the USA and Canada. Well,it seems there has been a meeting of a cold front and a warm front and that’s blown over to us across the Atlantic!

Don’t cast a clout till May is out, goes the proverb.But June too began with cloudy, thunder threatening, days.With this inclement weather some wild ones arrived seeking shelter near the house. The feral kitten population seems to expand around this time but we rarely see them again. They will not come near and I fear many give up their lives to the foxes, mongoose, and snakes that live or should live outside of our house.

My day in May began with the need to photograph the very green mosses on the rocks and experiment some more with my new camera. I wanted some close ups before the moss dries out and I had become fascinated by these ‘micro forests’ since reading the book ‘The Signature of All Things’. The main character Alma specialises in mosses and ‘discovers’some of the principles of evolution through a detailed study of adaptation. She talks about’moss time’ and the very slow evolutionary changes that take place. However, on reading the book ‘The Emerald planet’ about how plants have changed and adapted to planetary conditions, it seems it took over 40 million years for leaves to come into existence and changes in carbon levels in the atmosphere affected this. Human evolution in comparison to this took minimal time.

So after the sunny morning taking photos of mosses, wild flowers,camelia and lilac,the clouds came and then dramatic storms.

It was thunderous and torrential rain. Dramatic change. And then T discovered a 3ft long snake disappearing behind some of my plant pots. We were struggling to identify this and it was very difficult to take a clear photo.

And then another day, a month later, we had more torrential rain and another visitor. I had taken shelter from this downpour inside the house in my sanctuary but on the storeroom side T saw a snake’s tail. We identified this one quite easily.

Snakes in the South of Spain and Portugal.

We are lucky that there are few venomous snakes here and none with particularly fatal bites. I think more people in this area might be hospitalised for eating the wrong kind of wild mushrooms.

Snakes are a vital part of an ecosystem and like most wild animals would rather escape from us humans but can be dangerous if trapped or threatened in some way. Snakes may have a bad press but we can learn to live near them if we take a few precautions.

We identified the snake in early June as a ladder snake with two distinct stripes. Just visible from my yet another failed attempt to photo a snake. These snakes have markings like a ladder when young. As they become adult and much larger the ladder rungs disappear and leave the two stripes along the length of the snake. Snakes will certainly help control a rodent population. We think there are some bumps  to be seen. Perhaps a swallowed mouse or small rat. 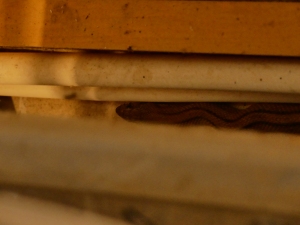 On looking at the snake in May I have begun to think that this was a ladder snake but it looked a bit circular or even zig zag like a viper. Perhaps the rungs are just beginning to disappear on this one. It certainly did not fit any other similar snakes for our area so think this is the answer. We couldn’t see its head either; a triangular shaped head and vertical pupils indicate vipers and therefore poisonous.

One amazing fact about ladder snakes is that the females stay with their young for a few days. A more sanguine fact is they can be aggressive and bite and these bites can be painful even though not poisonous. Snake bites contain anti coagulants that prevents the blood from clotting and so can take time to heal too.

So what to do with a snake in the house, over 3 feet long, possibly a good rodent killer but with a painful bite if suddenly disturbed. Well, the internet and some helpful advice. We thought about the blanket option of covering over the snake and then gathering it into a bag. I didn’t quite like the idea of the broom to guide it to the door and this was the upper part of the house and no door to the outside! Our ecologist friend sent a note about providing a black bag or box as snakes like dark places. Well, there were plenty of dark spaces behind all the boxes and it had gone under a bag near the pipes. In this area we left one of the natural rocks and built over it. We thought the snake would hide there.

Too much deliberation. When we came to look under the bag by the rock the snake had gone. After some thought we think there may be a natural hole in the rock and the snake has left the house. I did check under the bed that night though.

Here is a good phone photo of another kind of southern Spain and Portugal snake. This was taken by a friend in Cabanas de Tavira. It has distinct markings and is a horse shoe whip snake. Photo opportunities of wild ones are all about good observation, quick thinking and fast shutter speed, and luck with the light!

Most of our days in May have been spent on exploring some local walks suggested by a bird and wildlife guidebook to our part of the Sierra Morena. It has been good walking weather and an abundance of wild flowers. Hopefully I can run some posts on these when I return from another visit to see my grandchild, now trying to stand! She is growing so fast but with all the changes in my life I just about manage a blog post a month. I will try and keep posting and keep up with all your posts too.

27 thoughts on “Mayhem in May: Changing weather and other surprises. A sanctuary for snakes!”